Book Reviews: Sometimes I read things that are not (entirely) horrifying.

No, faithful reader (yeah, you), it's not always about demons, serial killers and bloodletting in the name of ancient gods over here.  I like the odd supernatural romance, postmodern brain-twist and sometimes even things that are funny. Soon, I hope to catch up with my reviewing duties on a few things that I've neglected, starting with reviews of a couple of really fantastic entries in two best-selling (and intelligent!)  paranormal series. Warning, here be spoilers.

Shadow of Night, by Deborah Harkness 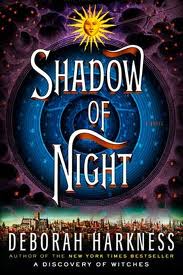 The rare sequel I enjoyed more than its predecessor (2011's A Discovery of Witches, more of a 4/5), the second book in her "All Souls Trilogy" gives scientific historian Harkness an even wider canvas on which to strut her stuff. The story of time-walking witch Diana Bishop, her vampire lover Matthew Clairmont, and the search for the mysterious manuscript Ashmole 782 continues. Shadow of Night, however, eschews laboratories and yoga in modern Oxford,  instead name-dropping its way around Tudor England and Emperor Rudolf's Prague, where the couple has gone through time, seeking answers about Diana's burgeoning powers, and hoping to find the manuscript prior to its corruption.

But Diana has difficulty adjusting to the diminished role of women in the 16th century, as well as being wife to a 1,500 year old vampire with a host of secret identities -- several in 1590s London alone. She clashes dangerously with Kit Marlowe (who is not-so-secretly in love with Matthew), practices alchemy with the Countess of Pembroke, trains her power with a London coven, and (barely) escapes the advances of a certain smitten Hapsburg. (Also present and accounted for? Magicians John Dee and Edward Kelly, Rabbi Judah Loew and the Golem of Prague, Sir Walter Raleigh, Shakespeare and Queen Bess herself -- a bit overly fond of Matthew.) The couple do spend some idyllic time at the deClairmont family fortress Sept-Tours, where Diana finally meets Matthew's legendary father Philippe (tragically dead since WWII in the present). But Diana's presence in the past -- and her taboo relationship with a vampire -- draw unwanted attention at a time of witch hunts and fear, and forces both human and supernatural threaten danger from all sides.

In other hands all of this might feel like overload, but Harkness's encyclopedic knowledge of the period, deft character sketches (who knew Elizabeth the Great was such a brat?), and an almost supernatural attention to detail transport readers as effortlessly across time as . . . well, a time-walking witch. Also? Diana and Matthew's romance is (finally!) steamier, despite all the layers of muslin and brocade. And there's a dragon! (Sort of.) I thoroughly enjoyed every page. Almost certainly on my Best of 2012 list.

The Magician King, by Lev Grossman Another excellent sequel, one I think reaches a much deeper -- and darker -- place than its predecessor. While The Magicians was a great, charming, surprising read, it sometimes felt like I was ticking of the wry hommages as I went along: Narnia, Wonderland, The Secret History, got it. Not that that was bad; it was snarky and funny and sad and not really like any of those books even as it tipped its hat. But The Magician King, while still being sharply satirical, is somehow much less flip, perhaps because it takes its characters to new emotional depths.

Instead of being focused entirely on  Quentin (now a bored King of Fillory) and his many charming neuroses, this time Grossman sends him, along with a strangely subdued and depressed Julia, off on a  picaresque, episodic quest, searching across Fillory (and far beyond) for seven magical keys which will
. . . well, I'll let you find that out for yourselves. The important bit is that the long (and we'll assume boring) periods between adventures allow room in the tale for the addition of another, radically different voice and experience of magic, as Julia's backstory unspools.

Quentin's vivacious high-school crush, you will recall, failed the Brakebills exam at the start of The Magicians; Julia's story picks up in the aftermath of that crushing blow. Unable to receive formal training for her talents, and despite her crippling depression (something Grossman writes about with sensitive clarity and realism), Julia perseveres, and discovers a wilder and much darker path to mastering her craft. Though she's also acidly funny, Julia's history of emotional instability, run-down suburban magic dens and reckless (and dangerous) guerilla spellmaking adds an element of gravity that The Magicians didn't quite nail.

Be forewarned, The Magician King also contains a scene that has upset some readers; in it, Julia suffers an incredibly violent magical assault, which changes her in profound ways. I found the attack to be a realistic and unsentimental consequence, given the danger and darkness of the magic being handled . . . but I read a lot of horror, so my sense of what's "too violent" or "upsetting" is probably fairly skewed.

Also, be prepared for quite a different kind of shock at the novel's end. Grossman breaks the narrative at a place that's more than a cliffhanger: it's a game-changer. Waiting for the conclusion to this trilogy is gonna be a bitch.

On a side-note, I was lucky to be at a small book signing Lev Grossman did for the paperback release of TMK back in May. He was unbelievably charming, and candid about his process, and the business, and his own inspirations. He also read us a draft chapter from the final book-in-progress, which was a definite treat. In his day job, Grossman writes about books for Time Magazine, and recently published a lively defense of genre fiction as literature, calling it a "disruptive technology" in the stodgy literary world. (My favorite line: "Tyrion Lannister isn’t real, but then again neither is Mrs. Dalloway.") Read his Time columns -- you'll laugh, a lot.

Posted by battyward at 4:50 PM