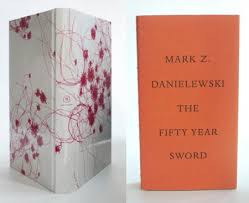 3.5/5
Prefatory note: I take a perverse pleasure in banging my head up against experimental narratives, have ever since grad school. I nearly wrote my thesis on Ulysses; adore Rushdie; will continue to mourn David Foster Wallace. China Mieville is my literary pinup. It's like . . . well, there's this old joke: Twin boys, one a pessimist and one an optimist, are sent to a psychiatrist because their parents are concerned about their personality extremes. By way of testing, the pessimist is shown a room filled with toys, but, afraid he would break them, immediately burst into tears. The junior optimist, however, was brought to a room filled to the ceiling with stinky, sticky manure. He climbed to the top of the pile and started digging gleefully. When asked why he was so pleased by such an awful task, he shrugged and smiled:“With all this shit, there has to be a pony in there somewhere.” I'm the sucker that can't stop believing in poop-covered ponies. Also the person who feels the sting of defeat if I just give up on difficult books. All of which has almost no bearing on The Fifty Year Sword, except by way of explaining how I got involved with reading Mark Z. Danielewski in the first place.

*******
In The Fifty Year Sword, more objet d'art than book-for-reading, Danielewski once again plays with type and page layout and color, and even texture via pinprick holes in the dust cover. (Are there 50 of them? Maybe 100, as if run all the way through? Perhaps; I didn't count.) I know this edition has been breathlessly awaited by those who couldn't get their hands on TFYS before, it having previously been released only in the Netherlands in 2005 and in a limited run of 2,000 copies in English in 2006. It's also been performed in 2010 and 2011 as a staged Halloween reading with shadow theater, which I imagine is a very cool show.

Danielewski's newest experiment-in-print asks nowhere near the commitment that House of Leaves does, nor is it ultimately as satisfying. (HoL has a pony, but the pile is pretty big. Not to say I didn't appreciate the exercise.) On the other hand, The Fifty Year Sword is far less overwrought: ephemeral like a children's tale (though not a tale for children), structured in a simple yet resonant poetic language. It's also quite slight; though the book-object itself logs in at 284 pages, at least half are loosely related artwork. (The art is all tactile, textural stuff, stitches and rips and cut and wrinkled paper. I'm sure it's really interesting in the original, but photos of these things are not.) This being an MZD work, some pages have only a lone word. Or none. They're calling it a novella, but I read it in one long, fascinated hour.

Ready-made to be told around the fire on Halloween (in an echo of the book itself), TFYS is the story of a story told by an uncanny stranger at an annual small-town Halloween party. Hosted by an ancient local eccentric, with both children and adults in attendance, the soiree this year doubles as the 50th birthday party of the local jezebel, Belinda Kite. Seamstress Chintana (the closest to a protagonist the book has) is in reluctant attendance, since her recent, unhappy divorce was a direct result of Ms. Kite's un(whole)some relationship with her husband. Chintana decides instead to spend the evening hidden away with the kids, for whom a storyteller has been arranged. (Does it matter the children are five orphans? Maybe.) And, after extinguishing the porch lights with his arrival, a "shadow cast by nothing," such a tale he has to tell.

Chintana's thumb begins to prickle ominously as she and the children listen wide-eyed to the mysterious Story Teller's tale of his protracted quest to find a magical weapon-smith, and his eventual acquisition of the Fifty Year Sword -- so named because its violence, no matter when dealt, does not reveal itself until the victim's 50th birthday. (The scene in the sword-maker's shop is particularly deft, both charming and subversive, with some of the most resonant bits of language in the book.)

And, perhaps even more interesting than his words, the Story Teller has something with him: a long, thin black box at his feet . . .  a box with five locks, just waiting to be opened.

Typographic visual games are only lightly applied in TFYS, which complements the style of the story. The important exception is MZD's  use of multi-colored quotation marks, each color indicating a different (but ultimately unknown and unknowable) speaker. This tactic renders dialogue into snippets of language, broken and overlapping, as each "speaker" chimes in. Like a palimpsest, under the postmodern antics there's the suggestion of a Greek chorus, breathlessly narrating events as they unfold beneath our impotent gaze. (Here there are only five in the chorus, one-tenth of the originally designated fifty. Yes, fifty.). This technique creates a mytho-poetic resonance that suits TFYS, at its heart a timelessly creepy little tale of hubris, vengeance, and the ofttimes queasy reality of getting a thing you have secretly wanted.

So here I am again, trying to review something that's as much an art project/performance piece as a book, and I come back to a similar problem I had with  House of Leaves. Sometimes the packaging gets in the way of a good story. Make no mistake, the story(ies) that comprise TFYS are compelling: eerie, sinister and viscerally satisfying in exactly the way fairy tales are. But in this case I feel slightly hoodwinked for paying hardback novel price and getting (at best) a slim novella. I know MDZ fanatics needed this edition on their shelves, but I would have been perfectly satisfied with a slim paperback (although that assumes there will be one). I'd recommend checking it out of the library (hell, you could read it without leaving the library!) and saving the cash for a ticket the (theoretical) next time The Fifty Year Sword is performed. Because that would make for a good Halloween.

Posted by battyward at 1:06 PM