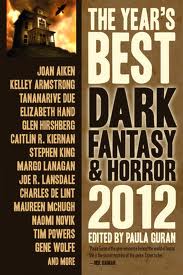 4.5/5
Dark fiction editrix supreme Paula Guran has put together another huge, mostly excellent selection this year, with enough variety to please most tastes. Here you'll find everything from cowboys vs. vampires, to pitch-dark fairy-tale revisions, to zombie baseball. There's also a visit to Marie Laveau, a "Maltese Unicorn," a  non-zombie apocalypse (for a change), a sand dune that predicts death, and a wardrobe that contains the whole sea.

She's also managed to draw some very well-established names -- like Stephen King, Charles de Lint, Caitlin Kiernan and Joan Aiken -- to sit side-by-side with relatively new talents. Some of my favorites include:

A book-lover's nightmare set in a dystopian near-future San Francisco, Glen Hirshberg's "After-Words" introduces the crazed leader of a book-cult whose end-time plans rely on remarkably old-fashioned methods. Hirshberg, a fellow SF denizen, always captures the tiniest nuances of the city, right down to the smells, night sounds, and neighborhood weather (yes, in SF we have different weather in different neighborhoods). Since the world in this story is quite grim, the verisimilitude adds an extra dose of shiver for me.

Joe R. Lansdale's "The Bleeding Shadow" has a Lovecraft-on-the-bayou vibe. Callow bluesman Tootie makes an unwise trade at Cross Roads Records: in exchange for a drop of his blood, he gets a platter full of unearthly music that, when he plays it, bequeaths him equally unearthly musical skills. Unfortunately, it also opens a doorway for those pesky things that should not be. (And if you like this story, I'd highly recommend picking up John Horner Jacobs' awesome novel Southern Gods.)
Yoon Ha Lee's "Conservation of Shadows" re-visions the ancient myth of Innana's journey to the Underworld as a MMORPG dungeon-like challenge, complete with mazes and inventory slots. I'd never read Lee's work before, but the juxtaposition of an eons-old tale with a futuristic gamescape makes for a memorable story, and Lee's language is beautiful and poetic.

"The Lake" by (the mellifluously-named) Tannarive Due, delivers a sneaky yet genteel brutality with the story of Abbie LaFleur, a Bostonian transplant to the deep south . . . where she really takes to her new environment.

And Laura Anne Gilman's "Crossroads" puts a quick and clever new spin on the standard deal with the devil.

I could go through the whole book like this. I am such a sucker for the short form, and Guran's choices are almost always top-notch: out of 33 stories, only one or two are a little meh, and that's probably just down to personal taste. (In fact, I'm not even gushing about other favorites -- Maureen McHugh's emotionally savage "After the Apocalypse," Elizabeth Hand's eerie "Near Zennor," and Tim Powers' clever and creepy "A Journey of Only Two Paces" -- because I have or plan to write about them in separate reviews of their authors' own collections.)