Summer with the Square-Headed Boyfriend

You know it's the middle of August when the best thing on live television is a Rob Schneider double-feature. Seriously, FX is showing "Deuce Bigalow, Male Gigolo" and "The Hot Chick" back-to-back tonight. I thank you, DVR inventor, and I love you more than you will ever know.

Actually, it hasn't been a horrible summer for television.
"Rescue Me" is, as usual, fantastically snarky and stylistically arresting. A couple of weeks ago, the episode started with a real-time rescue that went very wrong. The scene went on and on . . . smoke, screaming, no visibility, bodies carried out one after another. A woman tossing her toddler out a 4th storey window. After awhile I started to squirm, thinking it was going on way too long, and did we really need to see this? And then I realized, when the credits kicked in, I was holding my breath. It was possibly the most "real" rescue footage I've ever seen; not only that, it was integral to the plot (which also made me squirm), and not in a mechanical, procedural way. It was an ugly and painful and draining scene, the very definition of a bad day for these guys, and you felt the ramifications right along with the characters. Unfortunately, Denis Leary won't win an Emmy this year, either. Not until the show starts to suck, cause that's the way it works.
I'm getting into "Mad Men" on AMC, too; it's sort of pastel and alien and chilly. Everybody looks so sharp and clean and slightly drugged, and they all smoke like, well, like people used to smoke. They actually keep special bowls full of cigarettes on their desks! And drink scotch in meetings! The men sport sharp black suits and slicked-back hair and flirt with their secretaries, and the red-lipped women rock really sweet ballerina skirts and fabulous hats whilst drinking cocktails and stabbing one another in the back. Tres cool.
I was also one of the seven people who actually dug "John from Cincinnati," David Milch's much-critiqued post-"Deadwood" project. Granted, "Deadwood" left a pretty big footprint, and many fans were bitter about Milch's exchanging horses for surfboards in midstream, so the show faced some serious hurdles out of the gate. But say what you will about the high, nonsensical weirdness it offered every week, "John" never failed to be interesting. I'd have to say, as cryptic, quasi-apocalyptic, foul-mouthed, drug-addled, insane, elliptical fever dreams go, well done. I watched with furrowed brow and open mouth, marveling at the storm of language and the stark visuals. (And I gotta cheer the oblique reference to John Dee in the freak-out inducing symbol created by the titular Johnny Monad.) But I'm not sure anybody "got it." I enjoy things that feel like puzzles, but I guess most people just aren't into that kind of open-ended nonsense. And, since HBO cancelled it the day after its season finale, I can stick to my illusions and imagine it just wasn't given the chance to reveal its secrets. We'll never know, and I won't need Botox just yet.
Last thing for tonight: it's the household furnishings sending messages today, but they're getting mixed:
Couple discovers image of Jesus in kitchen cabinet
A Manchester, Connecticut couple is convinced they have a very special piece of woodwork in their kitchen. Malynda and Eric Smith say they noticed last Friday that one of the cabinet doors has an image of Jesus Christ in it. The couple says they have lived in the house for about a year and never noticed anything different about the cabinet. And they say it may be hard to believe, but everyone who looks at it sees the image.
Now, here's what they see: 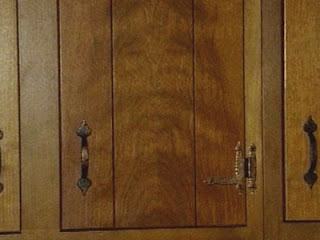 And here's what I see (in a detail of the forehead area): 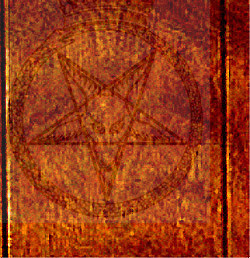 Everyone sees the image? Talk about subjective!
Posted by battyward at 7:28 PM