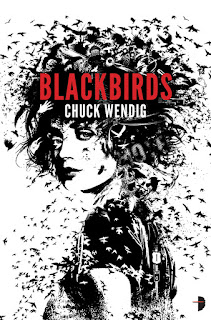 If Joss Whedon and Chuck Palahniuk had a love child, she might be called Miriam Black. A foul-mouthed and totally kick-ass borderline sociopath, Miriam also sees the future . . . or at least one particular kind of future: your death. With a simple touch of her hand, she knows exactly when, where and how you're gonna snuff it, and it's mostly not very pretty.

Neither is her life. When we meet Miriam -- in a cheap hotel room, posing as a truck-stop hooker -- it's just another day for her. On the grift, she makes her way by profiting from deaths foreseen. Having long ago come to the conclusion that she can't beat fate, so might as well profit from it, the self-proclaimed "vulture," is watching the clock on her current seedy mark (it's three minutes and counting) so she can liberate his cash and valuables, and move on. You can imagine how it's hard for her to make friends.

But when Miriam hitches a ride from nice-guy trucker Louis, she senses her own presence at his strange and violent death a few weeks hence. The vision haunts her, and somehow, a chance ride turns into an uneasy friendship, which kick-starts a twisted race to beat the reaper -- and maybe change the future.

I bought this book because I couldn't resist its gorgeous cover art, but Chuck Wendig really delivers the goods: Blackbirds is a fast-paced, ultra-violent supernatural noir, with cheeky dialogue and a vivid pop-culture vibe. 4.5 stars instead of 5, because sometimes the writing is too self-consciously edgy (a freeway has a "crusty, broken dividing line like a spattered stripe of golden piss"), but just as often lines made me laugh out loud.

At the time I picked it up, I was unaware that Blackbirds is the start of a series. Sometimes this really bugs me -- can nobody write a stand-alone anymore? -- but in this case, I'm glad. Miriam may have morals deep into the grey zone (and a mouth like a sailor, and a serious drinking problem . . .) but she's good, snarky company. And contrary to some other reviewers, I find Miriam to have a very believable "female voice." She may not be a role model, but like Arya Stark, Lisbeth Salander, or any number of Whedon's warrior women before her, she's one girl that doesn't take any shit. Even from Fate.

Posted by battyward at 3:52 PM