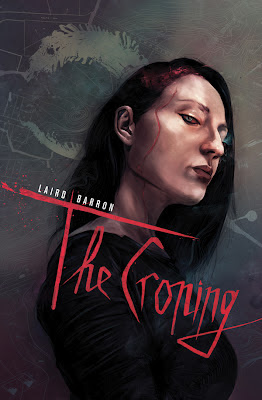 The Croning is a perfectly horrible book, and I mean that in high compliment.

It's rare that a horror story actually scares me these days (and more's the pity), but Barron's first novel is wrong in all the right ways, leaving behind a caul of unease, and a wicked dose of the cosmic heebie-jeebies. (I'm thrilled to admit that when I finished it last night, I left the lights on.) Also? Un-put-downable. The Croning sustains the poisonous adrenaline level of one of Barron's short stories over almost 250 pages; once you open the cover you are done for. But the faint-of-heart be warned: this is a seriously dark and unpleasant ride, with a sucking black hole where some might prefer redemptive resolution.

With each tautly descriptive and hallucinogenic page, the dread level ratchets up another notch, for both the reader and our "hero" Don Miller. Don, a  former  geologist and cave-expert now in his early 80s, has recently come to suspect that his notoriously unreliable memory is finally going for good. As Don settles into uneasy retirement in his wife's ancestral family home in the woods of the Pacific Northwest, he reviews his apparently charmed life: moderate wealth, adventurous travel, family and a 50-plus-year marriage with love of his life,the still-vivacious -- and still-successful -- archaeologist Michelle Mock.

But there is something wrong. Don feels a creeping dread about the house and the Mock family's mysterious history, as well as Michelle's long absences, unreliable itineraries, and violent mood swings. Now, Don's fears begin to coalesce into a pattern of nagging inconsistencies and memory-repression so terrifying as to indeed resemble dementia. This challenging timeline structure leaps back and forth across more than half a century of Don's life, methodically revealing the horrors that have been conspiratorially hidden from him until now, and unveiling the truly nightmarish source of Don's dis-ease -- his brushes with a cthonic cult that has flourished from before the dawn of time, and demands unimaginable sacrifice from its chosen acolytes.

In The Croning, Barron has fleshed out the rumors of "Old Leech" and his minions, who have appeared in certain of his short stories, creating an ancient and bloodthirsty mythology of Lovecraftian scale, but with a stench of cosmic horror that is entirely his own. It's sick, but I want more.

Posted by battyward at 2:56 PM