Book Review: Occultation and other Stories, by Laird Barron 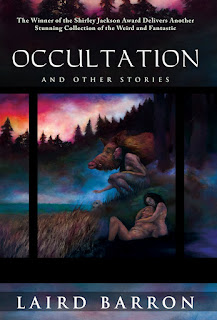 Barron’s second book of short stories absolutely delivers on the promise of his debut volume,  The Imago Sequence and Other Stories, and is in fact an even more accomplished and various collection, one in which his writerly scope, symbols, thematic preoccupations and chilling mythos all find room to grow. It's also deeply, deeply disturbing.

In my review of TIS I noted that, in keeping with the noir vibe of the collection, most of Barron’s protagonists were “tough-guy” types. Occultation, in contrast, offers a number of stories which prominently feature women, and the female voices and tragedies feel true . . . make what you will of the fact that each one is batshit insane. (Hell, most of Barron’s characters end up that way, or worse, regardless of gender.) Here, we meet Danni, a recent widow with an intermittent fugue state and a persistent urge to rejoin her dead husband in “The Lagerstatte”; in the Machen-esque “Catch Hell,” grieving mother Katherine and her anthropologist husband visit The Black Ram, an inn with an unsavory history and a reputation for black magic, to which they have come to enact an unspeakable ritual. (Sidenote: I've just run across another fantastic story featuring The Black Ram -- “Blackwood's Baby,” in  The Best Horror of the Year (Vol. 4). I enjoy watching worldbuilding in progress and love the way Barron is populating his with referents that appear across several works.)

Barron shows a real flair for the dialogue of couples, the petty jibes and secret histories they share lurking just beneath the surface. In the title story two lovers in a motel room speculate about a seriously freaky spot on the wall while passing a bottle; in “--30--” (which feels like an hommage to “Who Goes There?”), two naturalists, former lovers, are thrown together in isolation on a three-month wilderness project. Their repartee is barbed, quick and clever, until strange things start happening and the discovery of an ancient artifact tips them over into insanity and fatal paranoia.

Barron’s developing mythos also gains steam in Occultation. From the heartbreaking first story, “The Forest,” in which we meet the mysterious Dr. Toshi Ryoko, who seems to have a line on the horrors in store for the human race, to “Mysterium Tremendum,” in which Barron's cthonic cult  sprouts a text of its own – The Black Guide, a rare guidebook through the more unpleasant nether regions of Washington State. Following its lead, a group of weekend outdoorsmen stumble into a special kind of hell, one which contains revenants from their own troubled histories.

My favorite in the collection is the masterful haunted house story “The Broadsword.” This was the one that made me leave the lights on. Set in a Victorian apartment building which has seen better days, this is where we finally learn the name of the horror haunting Barron’s mythic landscape: the "children of Old Leech" have come out to play, and you will not forget them anytime soon. And once you have met, they will not forget you, either. Prepare to see a good deal more of them.