Book Review: The Imago Sequence and Other Stories, by Laird Barron 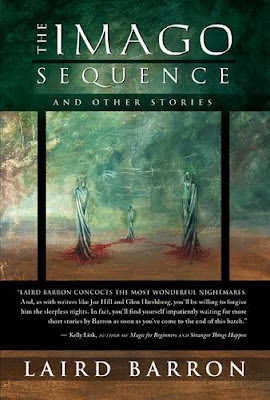 I kind of went at Laird Barron’s oeuvre backwards. Though I had previously read the short stories “Old Virginia,” and “The Broadsword,” in “new-Lovecraftian" anthologies, I picked up his excellent new novel The Croning before fully exploring either of his story collections (the other being Occultation and Other Stories). Of course I fell madly in fascinated disgust, and had to immediately devour everything he had in print. So I started at the beginning, with The Imago Sequence.

To read this set of stories, which range over a period of about six years just after the turn of the millennium, is to watch Barron’s uniquely horrific talent slowly unfold. Though quasi-Lovecraftian at times, Barron really has his own voice – in TIS  themes are introduced which will  eventually coalesce into a truly original mythology.

Heavily masculine and vaguely noir, most of the pieces in TIS feature a manly, tough-guy protagonist: an aging spook; a white-collar spy; a Pinkerton man; a crippled wrestler; the adventurer scion of a wealthy and privileged family. Fellow weird-fiction writer Brett J. Talley said of Barron that he “writes like Hemingway might have if he weren’t so boring.” That’s a perfect blurb if ever I saw one.

In Laird Barron’s horrorshow, however, these men are more often victims than heroes: we watch in disbelief as the kind of men who have never learned how to lose are broken down, turned inside-out, chewed up in the maw of a world become uncanny. Incidentally, gaping maws, too, are a thematic preoccupation of Barron’s. His is a cthonic, subterranean horror, lurking in the damp, hot darkness of mouths and caves, and in the primitive lizard-brain, unleashed by drugs or driven to insanity.

Standout stories in the collection are “Old Virginia,” the tale of a CIA agent nearing the end of his career assigned oversight on a very special MK-ULTRA project; “Procession of the Black Sloth,” a fevered nightmare set in an ex-pat community in Hong Kong; and “Hallucigenia,” about a man who has it all, but can’t avoid the slide into horror and madness after his young wife discovers something unspeakable in an abandoned barn. The title story, about a series of legendary and unpleasant photographs, is something of a sly nod to “Pickman's Model,” but also sets the stage for Barron's own developing mythos.

Be forewarned: these stories are not pleasant, and should leave you uneasy. There are no happy endings in Laird Barron's world, only variations on death and madness.