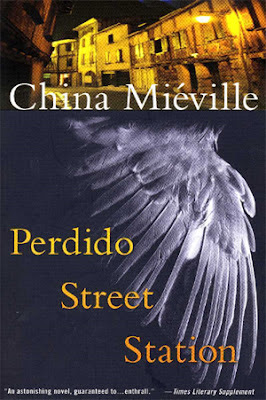 I can't believe how long it took me to pick up a book by China Mieville, and now I can't shut up about about him. Perdido Street Station is stellar and wholly original, truly literary weird fiction from a writer determined to subvert the reigning sci-fi/fantasy cliches. (In fact, Mieville is notorious for having referred to Tolkien as "the wen on the arse of fantasy literature.") Nevertheless, Perdido Street Station is, like LotR, essentially an epic quest tale, in which a mismatched group of everyday people must face overwhelming odds to rid their world of a menace so great -- and seriously unsettling -- it might mean the end of civilization as they know it. But that's where the similarities to "traditional" fantasy end.

I know several otherwise perfectly sane and intelligent people who refuse to read Mieville on the grounds that he is "too hard" (as in "I'm not in grad school anymore, so fiction shouldn't hurt my head," hard). And to be sure, his postmodern political education credentials and ginormous vocabulary are intimidating; but Mieville is his (our? whatever.) generation's reigning master of the weird, and his strange and lyrical mastery of the English language is currently unparalleled in the genre.

Like a sci-fi Rushdie or Dickens, Mieville revels in detail and lush descriptive language, and his city of New Crobuzon -- with its vile slums and peculiar brothels, political machinations and crime networks, artists and renegade scientists, "xenian" races, sentient constructs and horrific "Re-made" underclass -- reflects world-building on such a massively detailed scale that by the time you've finished you feel as if you could navigate its strange, seething streets yourself. On a few occasions, especially as the many narrative threads start coming together and the nail-biting climax approaches, these dense descriptive passages feel as if they are bogging down the tale, but their intrinsic beauty and alien horror are well worth the time spent in detour.

As a sidenote, Perdido Street Station is the first of three books set in the world of Bas-Lag. The second, The Scar, is not really dependent on having read the first, but The Iron Council (review coming soon) really is. Read them all, and I guarantee you will never forget Bas-Lag.

Posted by battyward at 3:34 PM