Book Review: The Light is the Darkness, by Laird Barron 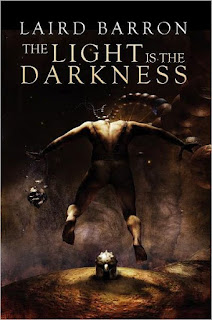 Conrad Navarro, modern gladiator with a genius IQ, is the apotheosis of all Laird Barron’s previous tough guy protagonists. He is their perfection – the imago, if you will – a poetic image which Barron invokes repeatedly in his body of work. The story of Conrad's transformative journey is violent, hallucinogenic, and terribly sad by turns; it's also surprisingly challenging in its execution.

Known simply as “the American,” Conrad makes his living fighting in ludi (singular ludis, after the games held in conjunction with Roman religious festivals): secret and meticulously orchestrated blood sports in which combatants fight to the death for the pleasure of the wealthy and powerful. Between bouts, Conrad obsessively searches for his missing sister Imogene, an FBI agent gone off the reservation on her own dark odyssey: she’s hunting the ancient, elusive and sinister Dr. Drake, a radical experimental physician who may have killed their cancer-stricken brother Ezra in a botched treatment . . . or was it an unspeakable ritual? Following her trail, Conrad finds the cryptic messages she has left for him, parlaying each into another step closer to his beloved “Genie,” and his own fate.

However, nothing in Conrad’s surreal world is as it seems. What really happened to Ezra and the others under Dr. Drake’s care? Why did his mother drive herself off a cliff, and what drove his father – less literally – around the bend? Why does Conrad, “a special case,” according to dear old Dad, seem impervious to death, and get stronger, heal faster by the day? And where has Imogene really gone?

What Conrad fails to grasp until it’s far too late is the extent of the conspiracy that enfolds his family, or the cruel cosmic game in which they are merely pieces on a board. In his blundering search for the truth, he has caught the attention of the darkness, and he will have to pay.

Short, fast and unapologetically brutal, The Light is the Darkness is a gut-punch that shares more stylistically with Barron’s first anthology The Imago Sequence than it does with his most recent (and more subtle) novel, The Croning . . . though one does get the feeling that all of Barron’s stories are taking place in the same savage world, that the cosmic horrors we meet are related, and that human beings almost always exist primarily as “provender” for their obscene needs.

At first I was mildly disappointed with LitD; so much happens so fast
. . .  it's like like bright strobes illuminate various setpieces, and then, before you can make the necessary connections, it’s over. But it had crept into my brain and wouldn’t leave me alone, so I went back to it. Though it's just novella-length, its fairly experimental style requires a closer look in order to fully appreciate the layers of imagery and sometimes nonlinear plot trajectory. Upon a second reading, symbolic patterns and foreshadowing emerge, and cryptic hallucinogenic stream-of-consciousness passages that seemed intrusions on (or excursions from) the main storyline click into place and make Conrad's story richer and ultimately more horrific. For me, real enjoyment of this incredibly weird book demanded study. The Light is the Darkness may not be anybody’s idea of light summer reading, but once again Laird Barron challenges the prevailing assumption that so-called "genre fiction" can't also be intellectually challenging.
Posted by battyward at 2:05 PM