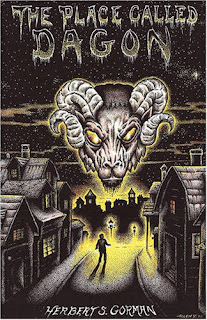 This great little weird novel was recently rescued from obscurity by publishing house Lovecraft's Library. According to Lovecraft scholar S. T. Joshi, HPL mentions having read The Place Called Dagon in his letters (1928) and also in Supernatural Horror in Literature. Though he called it "purile" at the time, there is much academic speculation that TPCD may have influenced classics such as "The Dunwich Horror" and "Dreams in the Witch House," and perhaps fear of comparison even played a part in HPL's reluctance to release "The Case of Charles Dexter Ward." Conversely, it is almost certain Gorman had never heard of Lovecraft -- the name "Dagon" wasn't original to HPL's 1917 short story -- and just happened to stray into the weird for this one novel. (Gorman wrote several, though he is now mostly forgotten).

Despite its anomalous state, TPCD actually sits quite proudly in the weird tradition, somewhere between Blackwood and Lovecraft: in some ways it recalls Blackwood's classic tale "Ancient Sorceries," but instead of time-haunted Europe, is set instead in HPL's eldritch and inbred New England.

Gorman's hero, a young doctor who has assumed a practice in an out-of-the-way Massachusetts valley, soon begins to suspect ancient and evil secrets persist beneath the hard, practical veneer of the town of Marlborough. Lo and behold, it seems the locals are in fact descended from survivors of the Salem witch-cult, and strange rites are being resurrected in the dark woods. The cast contains some pretty stock weird figures, including an arrogant arcane scholar, his disturbingly alluring wife, and a dour and malevolent preacher. Sometimes assisting the determined doctor in his search for the truth: Marlborough's now housebound former doctor -- a reticent (and mildly alcoholic) adviser on town matters; a beautiful and friendless orphan ingenue; and a stolid local farmer who is both kinder and cannier than he appears.

It's Gorman's rather modern writing which prevents TPCD from being "just" another forgettable pulp horror novel -- certainly, he's less long-winded than Blackwood and less purple than Lovecraft. His lyrical descriptions of atmosphere and landscape and keen insights into human motivation keep the tale interesting, and his candid take on female sexuality seems quite progressive for 1927. TPCD is a quick and enjoyable read, and deserving of being resurrected into the pantheon of the good weird. Four solid stars.
Posted by battyward at 10:39 AM