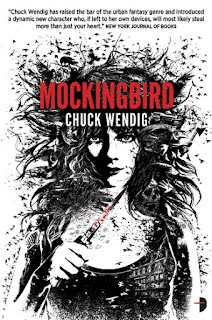 Ass-kicking "vulture" Miriam Black* is back, and trying to make a go of "normalcy." Sure, she's no longer grifting on the back of her visions of death, but then she's also dying a little herself every day. Sharing an Airstream with trucker Louis (who's never home), stifling her visions, and working the checkout counter at a crappy Jersey Shore convenience store just isn't cutting it. So when one more sunburned bitch in a muumuu makes a crack about Miriam's gloves . . . they come off. Both literally and figuratively. And we all know where that can lead.

Pink-slipped and pissed off, she's ready to blow town when Louis offers her a last-ditch peace-offering. He has a friend, a teacher at an exclusive all-girls boarding institution, who is willing to pay for Miriam's "talent," and she finds herself almost too eager to agree. Easy, in and out, right?

But as we all know, boarding schools just scream perverse and creepy, so she's not getting away that easy. When a casual encounter with a smart-ass student brings on a debilitating vision of the girl's torture and death at the hands of a bird-masked butcher, Miriam feels compelled to see what she can do about twisting Fate. Again.

While still rocking  plenty of Miriam's patented irreverent snark, and a bunch of epic fights (man can this girl take a beating -- she's either a Slayer or related to Harry Dresden), this book delivers a more introspective Miriam. We learn more about her seriously damaged history, and that recently, she's had a frequent visitor. She calls him  "The Trespasser," and he likes to arrive out of nowhere in the shape of a dead lover, the back of his skull blown off, delivering ominous messages regarding the "work" she has to do. Which is suddenly somehow related to the girls of the Caldecott School. So there goes Jersey . . . and the gloves. Who wants normal anyway?

Bravo, Mr. Wendig. A sequel that's as good as the first, possibly better (the yellow-line metaphors are certainly much more effective* . . . melting butter pats FTW!), Mockingbird also significantly ups both character development and the creep-factor, with Miriam facing a truly insidious and deeply disturbing adversary. A bit less noir and more horror than Blackbirds, this book kept me up late into the night, alternately cracking me up and building up dread . . . the twisted twists keep coming right to the end. Can't wait for #3 -- Cormorant -- due in 2013.

Posted by battyward at 9:02 PM