I had been meaning to read The Scorpio Races  for quite awhile -- it's been sitting patiently on my tablet waiting for an opportunity to stand out. Then I took only my e-reader on vacation, and there it was. Now I'm just sorry I waited so long it's already being developed for the big screen.

I suspect Maggie Stiefvater's  Printz Award-Honored novel is one of those books labeled as YA-specific at least in part because it can be: there's no sex or drugs, or even any particularly foul language. It has a feisty teenage heroine, a taciturn, moody hero . . . and YA is the hottest market to be in. True, it is a coming-of-age story, but much like The Hunger Games before it, or "Buffy the Vampire Slayer" before that, this is a "YA" story whose central concerns are ageless -- loss, family loyalty, poverty, desperation, endurance, and the weight of responsibility. (Also? Like the other two: there's death and violence, lots and lots of violence.) It would simply be a shame if the YA designation scared off potential adult readers by putting The Scorpio Races on the same shelf as Twilight. <climbs off soapbox> 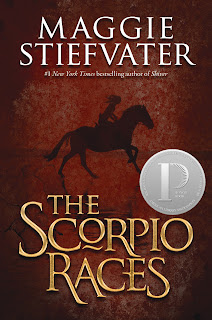 Set on a rocky, uncompromising island somewhere off the Western coast of not-quite Ireland, in not-quite the mid-twentieth century, TSR is not-quite the story of a girl and her horse. Well, it kind of is, but in no way you'd expect. What it also is: original, tense, otherworldly, and filled with wild, strange danger.

A " . . . crag jutting from the sea . . . hours from the mainland . . . all horses and sheep and one-track roads" -- Thisby's  biggest claim to fame is the Scorpio Races.
Each autumn, a festival is held which attracts wealthy tourists and gamblers from "the mainland," even as far as America. The days-long festival culminates in a horse race, one which kills  a significant number of riders -- bloodily -- every year. For on Thisby, as the month of October wanes, the capaill uisce, terrible, magical and bloodthirsty horses from the sea, emerge from the waves to menace the island, and insanely brave men  lose their limbs or worse catching and breaking them to ride in the annual abbatoir that is race day.

Kate (called "Puck") Connolly and her brothers, Finn and Gabe, were orphaned by the capaill uisce, both parents killed in a bloody boat attack. (Yes, they will attack both animals and humans, especially as autumn progresses.) After two years alone, the kids are barely getting by. When Gabe, the oldest and breadwinner, announces he's leaving Thisby for the mainland, Puck is heartbroken and desperate at the prospect of fending for herself and younger brother Finn. Thinking of the purse -- and  of punishing Gabe -- Puck makes a rash and foolhardy decision: she declares she'll be the first girl to compete in the Scorpio Races, and she'll ride her own (regular) mare, Dove, against the deadly water horses.

Sean Kendrick too, lost a parent to the capaill uisce . . . his father, and in the Scorpio Races themselves. But horses run in his blood: at nineteen, he's won the races four times, and will ride again this year on Corr, a powerful red water horse he has managed to quasi-domesticate. Sean is a preternaturally good trainer, handling both normal and water horses better than anyone else on the island. But he's also poor, and to survive Sean works at the breeding stables of the rich, unpleasant Malverns. His dearest dream is to run his own stable, but he hopes this year's purse will at least allow him to buy Corr outright.

And then, Puck meets Sean. But it's not-quite going to go the way you imagine.

Two appealing protagonists are set on a potentially fatal collision course, and it makes for juicy tension; adding carnivorous water-horses into the mix makes it feel like a fevered fairytale. Which it kind of is: Stiefvater has transformed the mythological Celtic "kelpie" into a magnificent and terrifying reality, a monster which nevertheless has a breathtaking beauty and primal appeal. And around the capaill uisce she has built a world so grounded and real -- so  vividly normal --  that the water horses deliver exactly the alien, bone-chilling intrusion that they should.

I have to confess I'm a a sucker for good art direction, and The Scorpio Races is a lovely odd, strange, exhilarating, melancholy book (maybe it's the Celtic influence). If, on occasion, the characters' decisions seem a bit predictable (hence the 4.5/5), it almost doesn't matter, since the tale quickly distracts again with its tension and eerie beauty.

Posted by battyward at 9:09 PM