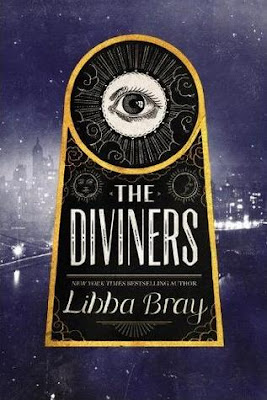 Libba Bray's The Diviners, yet another YA novel with a seriously dark streak, is set in the glittering Manhattan of the 1920s -- where jazz clubs are hopping, stars are being made, illegal hooch is flowing, and just about anything can happen.

A small-town girl from Ohio who commits a tipsy and socially ruinous party-foul, seventeen-year-old firecracker Evie O'Neill has been packed off to stay with her bachelor uncle Will in Manhattan (some punishment, right?). Despite the fact that she's stuck with a stuffy academic who runs a creepy museum (formally known as "The Museum of American Folklore, Superstition and the Occult," but mostly referred to as "The Museum of the Creepy Crawlies"), Evie is thrilled at the chance to taste big-city life for herself, and proceeds to duck Will and drag her quiet friend Mabel into fabulously-attired trouble at every opportunity.

But then Will is called to consult on a brutal murder with ritualistic occult overtones, and Evie brashly invites herself along to the crime scene. Here, her "party trick" again rears its ugly head: Evie has the ability to see a person's history just by touching their belongings. And, when she unthinkingly straightens the buckle on the dead girl's shoe, Evie has a vision like never before: she sees the killer, and he's not like you or me. In fact, it's the infamous occultist John Hobbes (also known as Naughty John) . . . and he's been dead for 50 years. Impossible as it may seem, he's back, and he's got a plan to bring on the end times -- one that's going to take several more bloody rituals.

Though it takes Evie, Will, and a host of friends (among them Will's taciturn assistant Jericho, shy Mabel, and street-smart scoundrel Sam Lloyd) almost 600 pages to unravel the supernatural killer's complex and gruesome intentions, The Diviners has never dull moment. Manhattan in 1926 is a huge canvas, and Bray brings it to life with flair -- the catchy slang, the clothes, the music, the promise in the air -- so "everything's jake," as Evie might say. The cast is also quite large, and full of vivid characters like iconoclastic Ziegfeld girl Theta; her charming "brother" Henry (read: gay bestie); Memphis, a poet who longs to be part of the Harlem Renaissance but runs numbers in the meantime; and Memphis's little brother Isaiah, who is having apocalyptic visions of his own. Each provides additional interest and intrigue, since they all have unique secrets and nightmares to conceal.
And, as the plot thickens and the killer counts down to a rare comet's appearance in the sky, they all, knowingly or not, play a part in the action.

I'll freely admit I thoroughly enjoyed every page of The Diviners, but do have one or two slight reservations, the foremost being that at times this book is extremely frightening and/or bloody, and it also includes scenes of sexual violence. While I found the book (appealingly) disturbing as a horror-jaded adult, it certainly would have scared the bejayzus out of me when I was the tender target age for YA lit.

Also, some aspects of the novel are almost laughably revisionist. For example: were seventeen year-olds really nightly fixtures at underground gin-joints, and did unescorted white girls often go to Harlem to hear jazz and flirt with black musicians, or wind up at hush-hush gay nightclubs? True, Bray is focused on boho underground culture -- theatricals, artists and musicians -- but the easy attitudes her characters have about race and sexual preference certainly weren't the norm at the time. In fact these kinds of "transgressions" regularly got people beaten or killed up until at least the 1960s, and (sadly) still might in some places. I guess I really can't fault Bray for trying to inject a little tolerance into her imagined 1920s -- after all, if we can buy a supernaturally resurrected serial killer, I guess Theta can fall for Memphis and Henry can dance cheek-to-stubbled-cheek with whomever he likes.

In the end, I might hesitate before handing The Diviners to my (imaginary) thirteen year-old cousin, but it's most definitely going on my Best-of-2012 list. And despite frequent rants about "sequelitis" on the YA and paranormal fiction shelves, I am not at all unhappy to hear Evie and company will return for further adventures. If nothing else, they bring the kind of clever vibe to fighting apocalyptic evil that calls to mind a different set of supernatural white-hats, also led by a sassy blonde. In fact, sometimes you can almost see Will cleaning his glasses -- and if you get that reference, you'll love The Diviners.
Posted by battyward at 4:17 PM

Esselent! Am intrigued enough to ask to borrow. Awesome use of adjective dashes btw. Cleaning my glasses now. Ps. There was plenty of sexual violence in ya books we enjoyed as yas, such as Egypt game. I think they can handle it.

I'm going to have to re-read me some Zilpha Keatley Snyder, because I do *not* remember that. Maybe it's just cause I was a teenage wuss that I imagine kids would be freaked out by horror/violence. I slept with my light on more often than not until I was 20. Heh.