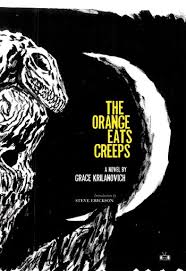 I had been looking forward to reading The Orange Eats Creeps for a long while. The glowing reviews! The blurbs that boldly proclaimed it a "new literature"; the future of horror! The shock, the grit, the awe, the really freaking weird cover . . ..

Meth and cough syrup junkie (maybe) vampires, Pacific Northwest, the 90s. Spreading dis(ease) and nihilism, riding the rails, hiding in the woods, stealing what they need. Told from the seriously damaged point of view of the only female running with a group of lost boys while ostensibly looking for her missing foster home "sister," TOEC is really mainly about these: body fluids, unsafe sex in gas station bathrooms, smoking, drinking, drug-overdosing, waking facedown in vomit in a grocery store breakroom. Facedown in blood behind a 7-11.  And again. And again.

I wanted to like this book, and I indeed did, at first. Krilanovich's fractured, stream-of-consciousness style suits the subject . . . the problem is not with the language, but with the hollow, drifting plotlessness of the thing. (Okay, drifters drift -- perhaps that's part of the point, but it does make for pretty repetitive reading.) Also?  Krilanovich was only about 14 years old when Kurt Cobain died. True, her main characters aren't meant to be that much older -- 16, 17 -- but there's this sense of trying too hard to be cool and affectless, of shock for shock's sake, lurking beneath her ugly/lovely, Burroughs-esque prose. (Truth: I don't much like Burroughs, either. If you do, you might like this.) Bottom line is I don't buy it, and I've lost interest in how (or whether) the story actually ends.

I'm going to admit here that I only made it a bit over two-thirds through TOEC -- what could have been a mash-up of On the Road and Requiem for a Dream just wound up mushy, monotonous and seemingly endless. I prefer the other "new voices" of horror -- check out the late Paul Haines for a more authentic, muscular version of self-inflicted Gen-X misery. In the end, TOEC is retroscope nostalgia for a fin de seicle ennui that ultimately imploded out of its own tiresomeness. Trust me; I was there.
Posted by battyward at 11:48 AM