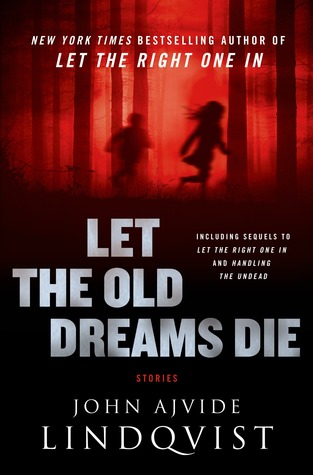 Wow, this book took me a long time to read. Not in a bad way; it's just that Lindqvist's first collection of short stores, while beautifully written (and beautifully translated by Ebba Segerberg), is dense, with the majority of the dozen stories on the long side, some to good and others to not-so-great effect.

Fortunately, there were only two stories I simply didn't care for in Let the Old Dreams Die. One, "To Put My Arms Around You, to Music," Linqvist admits in his amusing afterword, nobody but the author himself likes. (So it's okay that my notes on this story consisted of "I don't get it.") The other, "Itsy-Bitsy," is short and sharp modern morality tale about a scheming paparazzo, but its moral is kind of ham-handed, and it's just not of the emotional complexity I've come to expect from Linqvist and his characters. (Ironically, considering what I just said about long stories, I think those two are the shortest in the book.)

Overall, though, the collection is top-notch, with stories dark, surreal and moving all at once. Favorites include: "The Border," in which a middle-aged woman slowly realizes she's something other than she'd always believed (avoiding spoilers here); "Eternal/Love," about a couple who discover how to manipulate Death; "A Village in the Sky," a new-Lovecraftian-tinged tale about an apartment building gone subtly wrong and getting wronger fast; and "Tindalos," a tour-de-force portrait of one woman's anxiety which somehow morphs into a giant monster movie. These last three especially have a cosmic horror vibe that I really loved.

Finally, I'm sure people are wondering about the advertised "sequel" stories to Handling the Undead -- "Final Processing" -- and Let the Right One In -- "Let the Old Dreams Die." So how are they? Harrowing and beautiful, in that order. "Final Processing" brings us up to date on the un-pretty status of the "re-living," and is a pretty grueling read. It's also bordering on novella-length, losing some of its punch along the way. But "Let the Old Dreams Die," which closes the book, is a beautiful love story about a couple who met while working on Oskar's "kidnapping." (She was a cop; he was the station worker who punched Oskar's train ticket the last time he was seen alive. They clicked in the interview room.) The case continues to be an ongoing hobby for the pair, though the trail has long ago gone cold. I won't say any more, but the final page of this story is a little miracle, and a perfect note on which to end. (Except you should also read Lindqvist's afterword, which is funny and self effacing, as well as lending some insight to his madness.)
Posted by battyward at 11:25 AM