But I do. (In fact, this may be the most satisfying series finale since all the girls in the world got to be Slayers.)  My thoughts, and spoilers for "Form and Void," below. 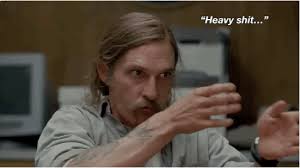 One good thing about cable's shorter seasons (besides higher production values) is that they generally provide tighter story arcs than the old-fashioned 22-ep seasons, and so more easily lend themselves to an analysis of the narrative in its entirety, for its themes, moments of excellence, and some of the promises it left unfulfilled. True Detective has been heaped with praise and put under intense scrutiny by both the media and obsessive viewers since the first episode. The sordid mystery of  ritually murdered girls and a place called "Carcosa" came on like a hallucinogenic, all washed out bayou color palettes, sinister symbols and fashionable nihilism. Its first five episodes might be more  disturbing and existentially intense than anything else on TV. (Well, this season's Hannibal is also outdoing itself, but that's for another time.)

Some of that intensity, at least the part where the lurking evil went undefined, came to an end with Marty's disgust-fueled execution-style murder of the suspected "monster," meth and LSD chemist (and serial child abuser) Reggie Ledoux. Though we would later discover this hydra had many more heads, for now it was back to normal for Hart and Cohle, hailed as heroes in a case they'd actually kind of fumbled. So episodes six and seven, instead of being propelled by the case, were fueled by the unlikely partners' egos and secrets and personal lives crashing and burning. I can't say I was totally on board with the downshift at the time (I like weird), but it served the narrative well. Most importantly, this is when Marty Hart and Rustin Cohle became real to me: not just Woody Harrelson  and Matthew McConaughey giving stellar performances, but real, rounded, flawed and memorable characters, whose journey -- toward hell or redemption -- mattered to me, even leaving aside the quasi-supernatural weirdness. Maybe that was when I fully realized it was their story, not the Yellow King's.

I think there will be a fair number viewers disappointed that the weird fiction ties became less substantial as the series progressed. Wondering if Nic Pizzolatto, even though he is one, was maybe having us horror fans on a tiny bit. But he told us from the beginning that all the monsters in True Detective were human. (Barely so, in the case of Errol Childress and his (ugh) family, but human nonetheless.)  We all know evil exists in our world, and humans are worse than all the supernatural horrors we can imagine. The final episode brought that home explicitly. I don't know how much more evil viewers need to see than that horrific view inside the delusional monster's world. Thanks, Nic, we got it. (Furiously washing eyeballs.)

And those grim Ligotti nods coming out of  Rust's mouth in the early episodes? In his essay on pessimistic philosophy, The Conspiracy Against the Human Race, Ligotti does express a number of opinions that inform Rust's dialogue. Ligotti also opines that the worst kinds of pessimistic thinkers are the ones that equivocate, opening the door for a crack of cruel hope rather than carrying their philosophy to its logical end: voluntarily ceasing to exist. And I've got to tell you, I was sure both Marty and Rust would be dead when the backup arrived, or at least that Rust would bleed out right there in Marty's arms when he pulled that blade out of his gushing gut. He'd done his work, and it was time. I was prepared to say goodbye.

So Pizzolatto's totally unexpected final scene probably has the elusive Ligotti spinning in . . . well, Florida, or wherever he is right now. Because, after all, Pizzolatto did something I was totally unprepared for, given what had come in the previous seven-and three-quarters hours of television: he gave us hope. (How dare he!) And closure. Rust's near-death enlightenment was certainly no tunnel of light; it was dark and sludgy and all-consuming, yet somehow it healed him. His last words to Marty -- "You're looking at it [the night sky] wrong . . . once there was only dark. If you ask me, the light's winning" -- tell the story of someone who's finally put his many demons to rest.

True Detective's first season closer, "Form and Void," may not have not given viewers all the answers (what was with Audrey and her creepy dolls and pictures? Who, exactly, was The Yellow King in this scenario? Errol? or was he just the procurer and master of ceremonies? Why couldn't they give Michelle Monaghan something better to do?); but it did provide something I don't think anyone expected: a story about true friendship, grace, and a happy ending. Or as happy an ending as two obsessive, lonely, dark, irascible, flawed men who bonded over lies and horrors can have. I like the thought that somewhere out there, Marty and Rust are drinking Lone Stars, parsing constellations and bickering. Let's call them the Odd Couple for a new millennium. (And since Pizzolatto has retained the literary rights to the characters, we can always hope. How cruel.)

P.S.: There was one thing I felt I had to take issue with: no matter what came out of any of those characters' mouths, what the Carcosa cabal were up to was sick and cultlike, but it bore NO resemblance to voodoo, or voudu, as many of the thousands of contemporary practitioners would call it. I thought it was sloppy dialogue for cops to call the crimes "voodoo shit," because anyone from that part of the country would certainly know better.
Posted by battyward at 10:46 AM